This weekend, I was honored to be invited to race on a Ragnar Relay team with Nuun Hydration, a company I am proud to represent as an ambassador. Just a little shameless plug: Nuun is the best product for ultimate hydration. And since the Ragnar Relay this weekend was in the dry, dusty desert of Utah, it was in fact the best piece of pro I had at my disposal. This is my recap of the first-ever Ragnar Trail Relay, the Ragnar Trail Zion, which was held near Zion National Park at the Zion Ponderosa Ranch (of which the address is literally “5 miles down Twin Knolls Road”).

Going into the race, I was excited to experience something a bit different and off the main stream from the well-known company, Ragnar Relay, which was started by Tanner Bell and Dan Hill in Utah in 2004. The company has grown exponentially in both the number of events and its exposure over the last decade; there are now over a dozen road relays spread across North America (yes, one even takes place in Canada!). I appreciate their organization, team-mindedness, and enthusiasm for all things running. I have raced a handful of Ragnar Relays (four, to be exact), along with my wonderful womanly teammies of Team Mega Tough. We’ve utilized these races as a tool to reconnect over the years and across the distance; they serve as a reunion of sorts for a group of girls who ran cross-country and track together in college, and we’ve been joined by more awesome friends we’ve met between now and then. Now that we are no longer all in one place, but rather spread out all across the country (with members in Berkeley, CA; Baltimore, MD; Duluth, MN; Detroit, MI; Saint Louis, MO; etcetera…), we use running reunions of all different kinds to catch up. We’ve even used them as bachelorette parties, since running around Grand Island in Lake Superior is, at least to us, much more fun than partying with penis straws in Vegas. We have successfully, and sometimes less-successfully, crushed 200-ish miles as a regular 12-person team and even as a women-only ultra (which is 6-person), and we’ve always – no matter what – come out on the other side with fantastic memories, a closer bond, and a wonderful sense of just exactly what it means to be the best of friends.

I flew into Vegas two days before the race start, which gave me plenty of time to get settled and relax a bit. I stayed at Mandalay Bay with Mickey, a triathlete who lives in Miami (who rocks). After a good night sleep in big comfy beds, we ran a few errands and picked up Sean and Caitlin from the airport to head north to Zion. The drive was uneventful, but gorgeous, and we passed through Zion National Park during one of the last days of National Parks Week. Zion is amazingly gorgeous, and the route to Zion Ponderosa Ranch did not disappoint. 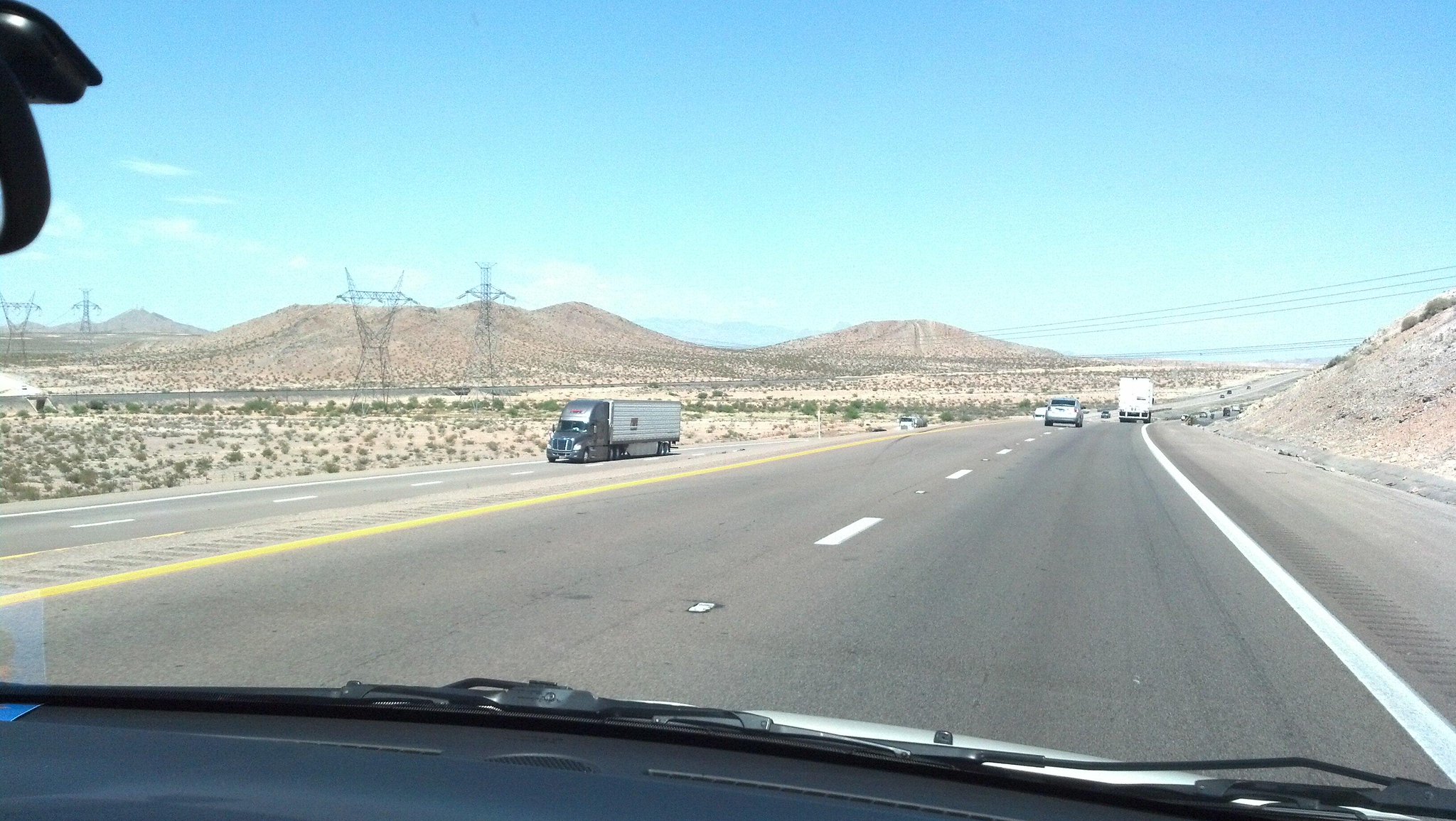 The drive from Vegas to Zion did not suck.

Once we arrived at the Ranch, just outside ZNP, we met up with Megan F., Dana, and Michelle. We then set up camp and had a hot meal at the lodge. It took a while, so we ended up heading back to camp afterward and hitting the hay.

“Race day” is kind of a weird thing to say for a Ragnar Relay, since your race doesn’t start until the afternoon sometime and usually lasts into the next day. For those not familiar, Ragnar Relays (road and trail both), and some other relays, are anywhere between 120-210 miles long, so they take a while no matter how fast you and your teammates may be. The faster your seed time, which is typically based on your road 10K race pace or a half marathon pace, if you’re racing an ultra, is what determines your start time. The faster your seed time, the later your start time. This way, all teams will finish within a few hours of each other, as opposed to the fastest teams crossing the finish line first. In fact, rarely if ever do the fastest teams actually complete the relay before anyone else, which I think is a really awesome aspect of the Ragnar Relay design: Whether you’re fast or not-so-fast, you are running the same course, at the same time, as everyone else.  I love the flow that staggered starts have, and it also influences the attitudes of racers, in my opinion, for the better. There’s less stress, less ego, less anxiety with a staggered start time, and its fun to be running with and around other people. 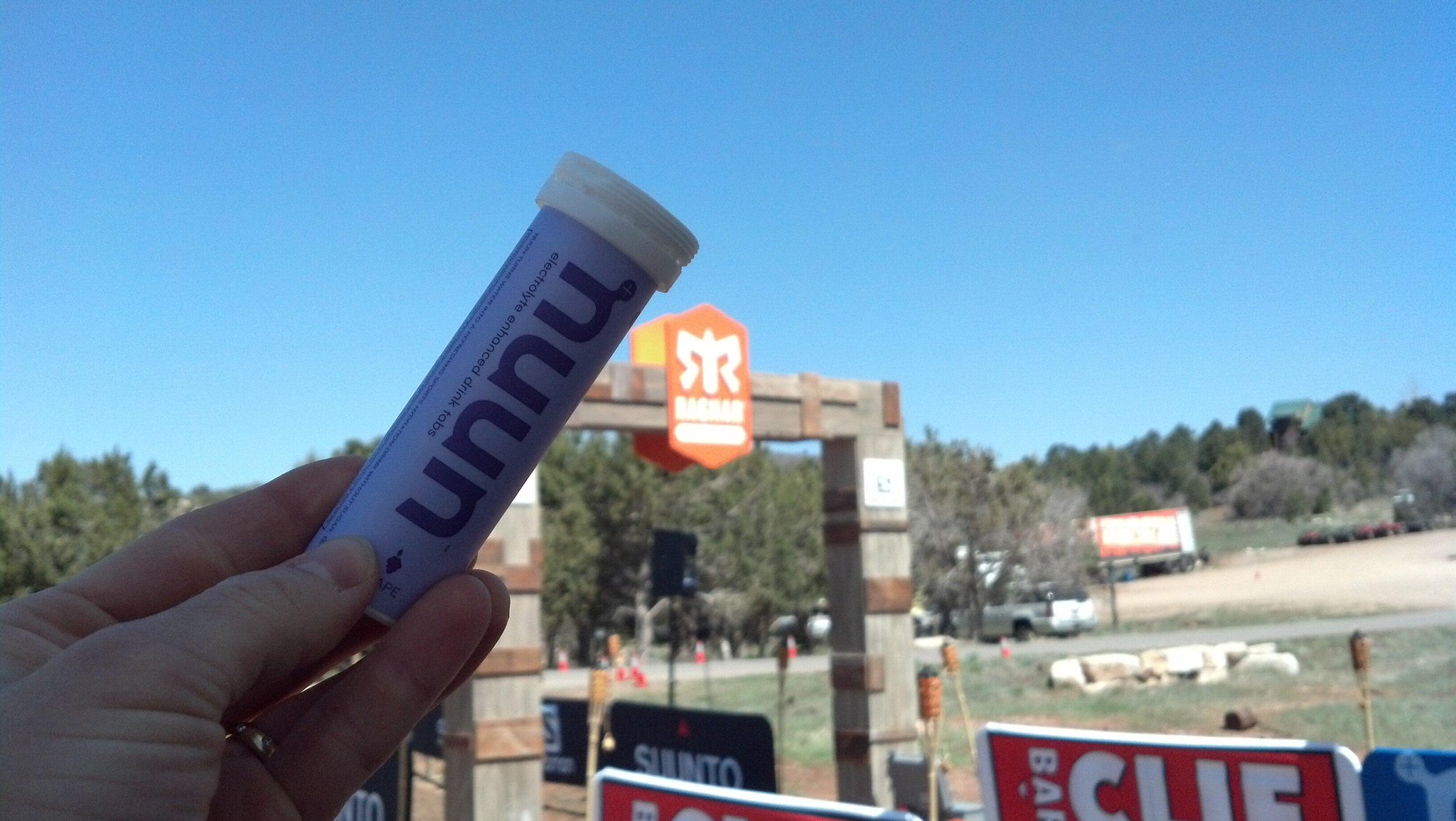 Around lunch time, we picked up a runner to fill our 8th spot, thankfully. Mike, a member of the Ragnar Crew, wanted to race and we were excited to fill that spot. As an extra bonus, Mike is superfit, and also superfun, so we appreciated his offer to join our squad. 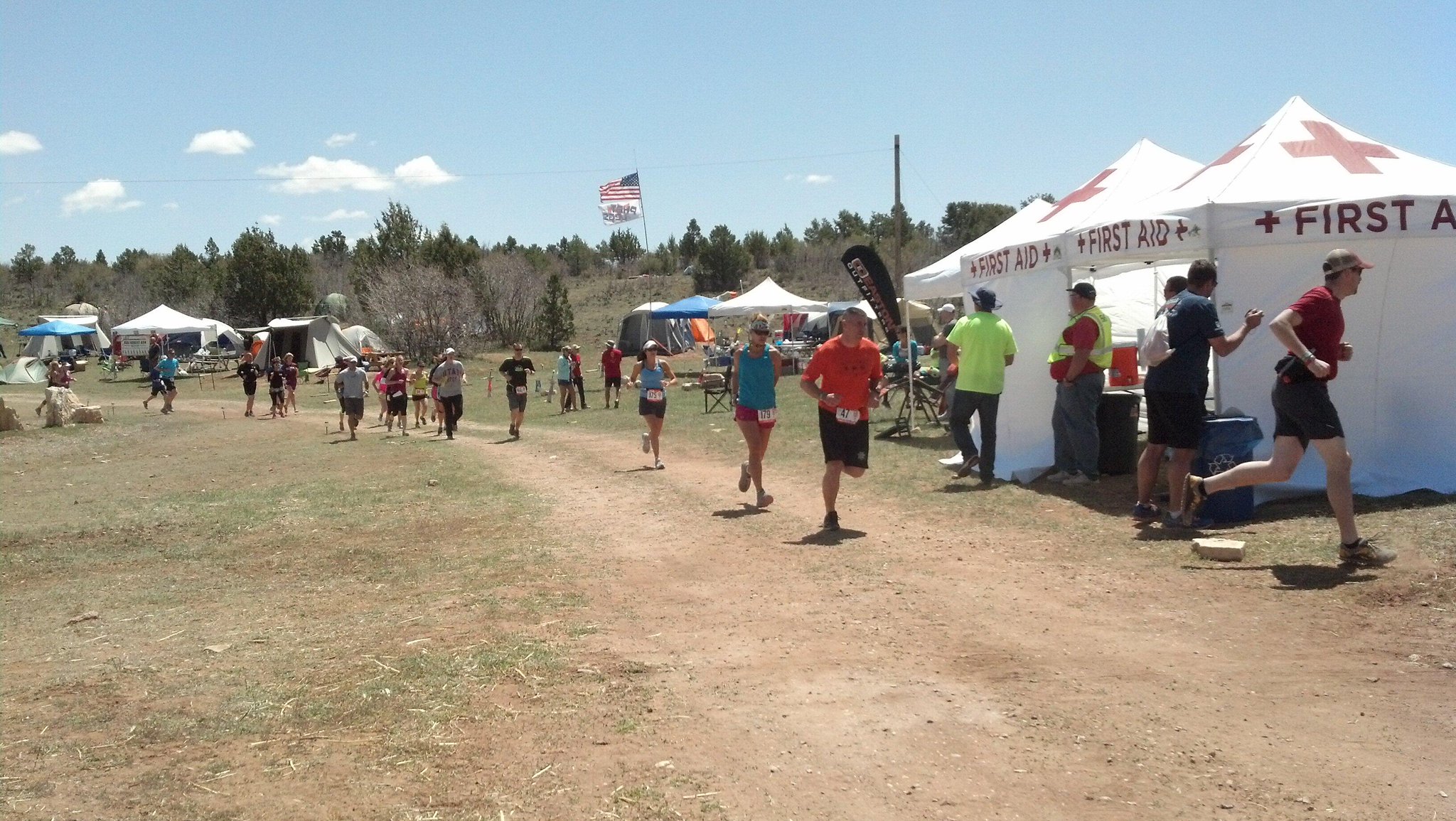 Runners taking off on their first, Green, loop.

Our start time was at 4pm, so we kept the Nuun jugs filled up (10 gallons each of Fruit Punch, Orange, and Lemon-Lime go fast in the desert heat) and cheered on the racers. Dana was our first leg, which meant she ran the Green loop; a 3.5mi bobby-pin shaped trail that reunited with the Yellow (a 4mi loop with biggest elevation gain) and Red (a 7.5mi loop) loops at the end. There were three trails in total; with a regular team, we each ran one of the trails one time. The order of the trails were: Green, Yellow, Red, and then back to Green, so we experienced the trails in the following order: 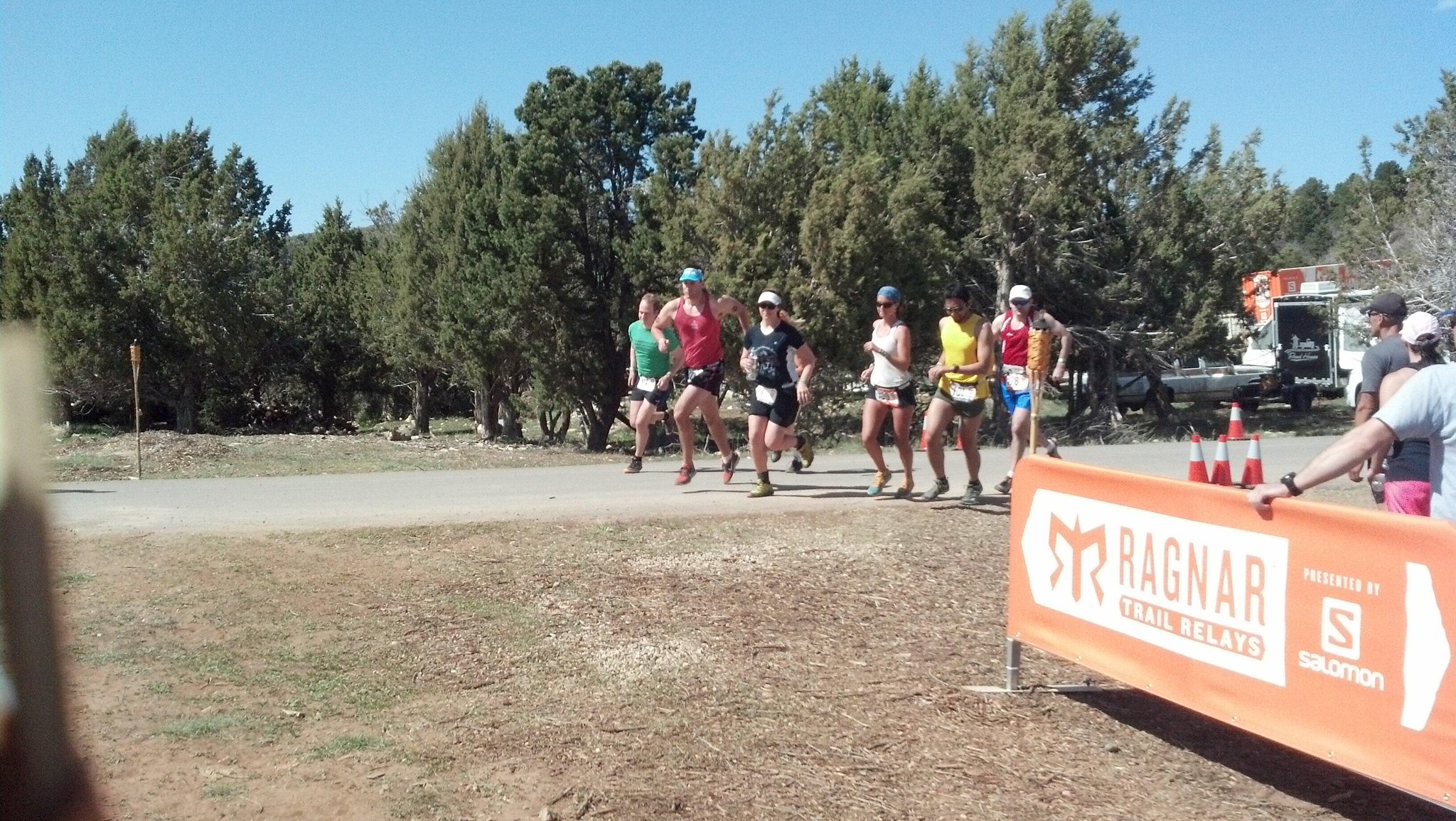 Dana starting us off

Dana handed off to me, and I cruised through a mile or two of the Yellow loop before I took a wrong turn, unknowingly. Eventually, I made it back to the correct trail, after putting a log across the trail that I took but was not supposed to take, and reassured my teammates that I was still alive. As the sun began to set, the headlamps came out and the team clicked through their legs smoothly. I took a nap in the tent during Michelle’s run, and headed back down to the expo area to sit around the fire and watch “Unbreakable” on the big screen in front of the campfire.

Around the campfire, watching a movie. Photo by Megan Fay

My second leg took place in the dead of night, and it was a quick and dirty 3.5miles. The athletes were quiet, bundled up around the campfire, not a lot of energy, just a lot of quiet. The moon was bright and the signs were incredibly easy to see. My headlamp was almost too bright. With only 3.5 miles of trails, I felt like pushing myself an extra bit, and felt extra fast. There’s something about running under the stars that is simply exhilarating, and the adrenaline is pumping, too. Afterward, I made a concerted effort to sleep longer, so I wrapped myself in my sleeping bag and slept for a solid 4 hours straight. I think that’s a Ragnar record.

Once the sun started coming up, I headed back down to the athlete village to prep for my final leg of 7.5 miles. My college teammate, KO, was at the race as well working/racing for Salomon. Although her team, the Salomon Elite team, had a 7:30pm start time (more than 3hrs after ours), they were catching up to us, and we warmed up a bit together before our hand-off runners came in. That’s one of the really neat things about doing relay races, especially Ragnars. The start times are staggered so that everyone finishes around the same time (within a few hours), and then there’s a big party.

The third and final loop for me, the Red Loop, was beautiful and fairly flat, with a few false-flats. The sun had come up, I felt good, the altitude wasn’t affecting me too much, and I ski-walked where I needed to. And, knowing full well how the last half mile finished- since it was the same connector trail as the other two loops- I dug deep and pushed it to the finish. It didn’t take long for the rest of the team to roll out of their sleeping bags and head out on their final laps. In fact, Megan F. – who didn’t sleep the entire time, mind you – wrapped up her anchor leg swiftly in the heat of the day!

All in all, the race was a blast and the weekend was fantastic. The trail relays make for a great way to spend time on the trails with friends (new and old), and logistically, they are cake. You simply drive to the race site, set up a tent, and hang out until its time to run. There’s no driving from Point A to Point B; no worrying about driving at 3am. It’s more relaxing and less stressful, being out on trails as opposed to in “civilization.” That being said, there’s plenty of running, hot water (there were people who took a shower after each of their legs), real toilets, and even cabins for those who planned ahead. Of course, trails are typically slower, more technical, and more “adventurous” than roads, so if you aren’t a fan of trail running, Ragnar Trail Relays probably aren’t for you. That being said, if you’ve never done a trail race before, the loops are short enough to not overwhelm even beginners; when the going gets tough, the lap is almost over. There were tons of veteran trail runners out there, but there were even more newbies, people who came from sea level and have never ran a trail race before. Plus, Ragnar knows how to manage races well, and the centricity of the athlete basecamp made things a bit easier, too. I highly recommend these, and look forward to my next Mega Tough get-together at a Ragnar Trail Relay.  Until the next one…

Check out my teammies’ blog posts, too!

Achievement unlocked
Everything in my life rn is bleeding maize and blue
Khao soi 🤤👏👍🤩
Day 1 at new gym after a while away from the box and, yep, my arms are jello. This is going to be fun. PC📷: Coach Addison